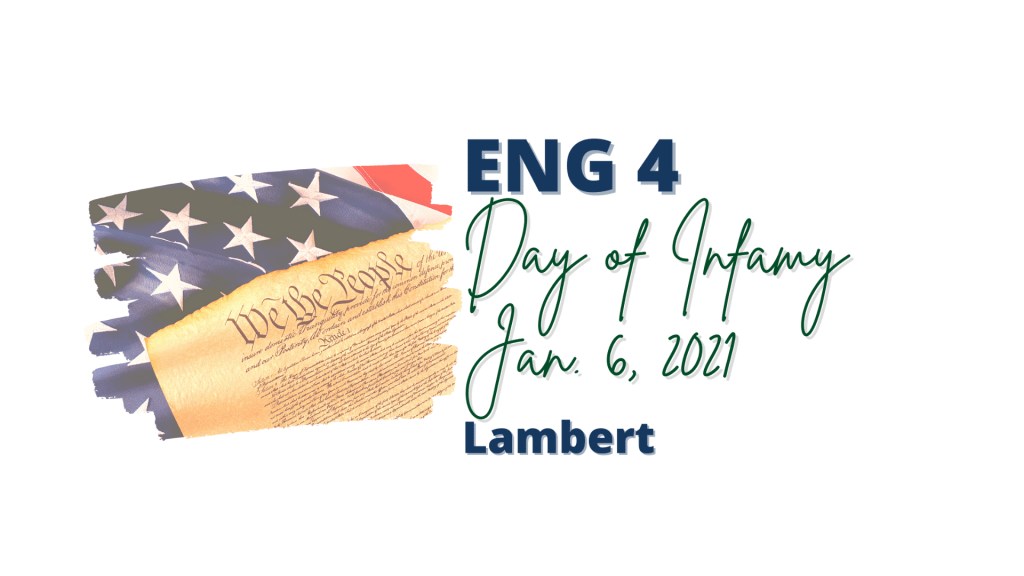 Below are the resources I am using to present and discuss the events of Wednesday, January 6, 2021 with my students.

This NASP Guidance for Ensuring Student Well-Being in the Context of the 2020 Election article and this Resources for Teaachers on the Days After The Attack on the U.S. Capitol helped guide me as I planned out how to handle this event with my students. These resources and many of the others below were curated by myself and our AP Government teacher Ms. Bekerman.

Click here to make a copy of the Notes and Letter to Your Future Self Google Doc. Click here for a PDF. 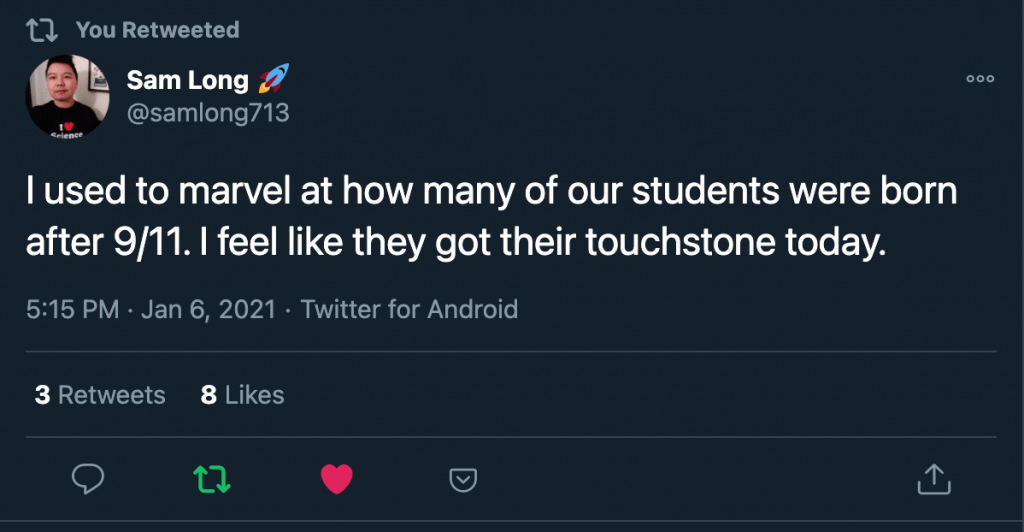 These are terms that you will see in the articles and videos.

coup d’état: a sudden decisive exercise of force in politics especially: the violent overthrow or alteration of an existing government by a small group

treason: 1: the offense of attempting by overt acts to overthrow the government of the state to which the offender owes allegiance or to kill or personally injure the sovereign or the sovereign’s family 2: the betrayal of a trust: TREACHERY

sedition: incitement of resistance to or insurrection against lawful authority

insurrection: an act or instance of revolting against civil authority or an established government

patriot: one who loves and supports his or her country

Five Things to Know About the 1876 Presidential Election

“A mob of violent pro-Trump protesters who oppose President-elect Joe Biden’s victory in the 2020 election overwhelmed security at the U.S. Capitol and broke into the building on Wednesday, halting proceedings where Congress was poised to count the votes cast by the Electoral College.

Some Republicans in both chambers declared that they would object to the counting of some states where President Donald Trump lost his closest races to Biden. But before protesters entered the building, Senate Majority Leader Mitch McConnell delivered a forceful to rebuke to the idea that Congress could or should attempt to overthrow the election.

Earlier, Trump spoke at a rally where he urged supporters to march to the Capitol to demand that the results be overthrown. After rioters forcefully entered the building, he tweeted a recorded message telling people to “go home now,” while repeating false claims about the election.”

https://www.allsides.com/story/capitol-lockdown-pro-trump-breach-capitol-building-clash-police (Links to an external site.)

From the Left (CNN Web News)

From the Center (Reuters)

Former President Jimmy Carter and his wife Rosalynn issued a statement late Wednesday evening after a mob broke into the Capitol building earlier in the day, interrupting the certification of the Electoral votes by Congress.

“Our country’s long and proud history of peaceful and democratic transitions is being tested by the events unfolding inside the U.S. Capitol, which was put on lockdown after protestors stormed the building.

While The Carter Center supports Americans’ right to protest peacefully, it strongly condemns threats or violence of any sort.

We call on the mob inside the Capitol building to disband immediately and on all protestors to respect the 6 p.m. curfew. As many members of Congress on both sides of the aisle have said, the democratic process of certifying the election results must be allowed to continue.

Despite the coronavirus pandemic, voters participated in the November 2020 election in record numbers. The process of counting and verify the accuracy of the results has been completed, and the extensive legal challenges have been resolved, resulting in Joe Biden being declared the winner.

All Americans should be proud of what was accomplished. Although there is no doubt that the entire process has been credible, there has been an historically unprecedented and damaging effort to deny and reverse the expressed will of the people. This has put significant strain on our democratic system and created an ill-found double among millions of Americans about the integrity of the elections.

As we have done throughout our history, it is time to support a peaceful transition and work together towards a prosperous and shared future.”

Former President Bill Clinton released the following statement Wednesday after the events in Washington, D.C. in which a mob of President Donald Trump’s supporters rioted at the U.S Capitol, interrupting the affirmation of President-elect Joe Biden’s Electoral College victory.

“Today we faced an unprecedented assault on our Capitol, our Constitution, and our country.

The assault was fueled by more than four years of poison politics spreading deliberate misinformation, sowing distrust in our system, and pitting Americans against one another.

The match was lit by Donald Trump and his most ardent enablers, including many in Congress, to overturn the results of an election he lost.

The election was free, the count was fair, the result is final. We must complete the peaceful transfer of power our Constitution mandates.

I have always believed that America is made up of good, decent people. I still do.

If that’s who we really are, we must reject today’s violence, turn the page, and move forward together—honoring our Constitution, remaining committed to a government of the people, by the people, and for the people.”

Former President George W. Bush released the following statement Wednesday after the events in Washington, D.C. in which a mob of President Donald Trump’s supporters rioted at the U.S Capitol, interrupting the affirmation of President-elect Joe Biden’s Electoral College victory.

“Laura and I are watching the scenes of mayhem unfolding at the seat of our Nation’s government in disbelief and dismay. It is a sickening and heartbreaking sight. This is how election results are disputed in a banana republic — not our democratic republic.

I am appalled by the reckless behavior of some political leaders since the election and by the lack of respect shown today for our institutions, our traditions, and our law enforcement. The violent assault on the Capitol — and disruption of a Constitutionally-mandated meeting of Congress — was undertaken by people whose passions have been inflamed by falsehoods and false hopes.

Insurrection could do grave damage to our Nation and reputation. In the United States of America, it is the fundamental responsibility of every patriotic citizen to support the rule of law. To those who are disappointed in the results of the election: Our country is more important than the politics of the moment. Let the officials elected by the people fulfill their duties and represent our voices in peace and safety.

May God continue to bless the United States of America.”

Former U.S. President Barack Obama released the following statement about the chaos at the U.S. Capitol on Wednesday evening.

“History will rightly remember today’s violence at the Capitol, incited by a sitting president who has continued to baselessly lie about the outcome of a lawful election, as a moment of great dishonor and shame for our nation. But we’d be kidding ourselves if we treated it as a total surprise.

For two months now, a political party and its accompanying media ecosystem has too often been unwilling to tell their followers the truth — that this was not a particularly close election and that President-Elect Biden will be inaugurated on January 20. Their fantasy narrative has spiraled further and further from reality, and it builds upon years of sown resentments. Now we’re seeing the consequences, whipped up into a violent crescendo.

Right now, Republican leaders have a choice made clear in the desecrated chambers of democracy. They can continue down this road and keep stoking the raging fires. Or they can choose reality and take the first steps toward extinguishing the flames. They can choose America.

I’ve been heartened to see many members of the President’s party speak up forcefully today. Their voices add to the examples of Republican state and local election officials in states like Georgia who’ve refused to be intimidated and have discharged their duties honorably. We need more leaders like these — right now and in the days, weeks, and months ahead as President-Elect Biden works to restore a common purpose to our politics. It’s up to all of us as Americans, regardless of party, to support him in that goal.”

The very nature of civil disagreement is to acknowledge respectfully the views and experiences of other people and learn from differing perspectives.

Statement by President Donald J. Trump on the Electoral Certification

“Even though I totally disagree with the outcome of the election, and the facts bear me out, nevertheless there will be an orderly transition on January 20th. I have always said we would continue our fight to ensure that only legal votes were counted. While this represents the end of the greatest first term in presidential history, it’s only the beginning of our fight to Make America Great Again!”

Photos from Wednesday, November 6, 2021 (Links to an external site.)

Write a letter to your future self about the events of January 6, 2021.

Write a letter to your US Congressional Representative(s). As their constituent, you can share your thoughts, ideas, questions, or concerns with them about the events of January 6, 2021.