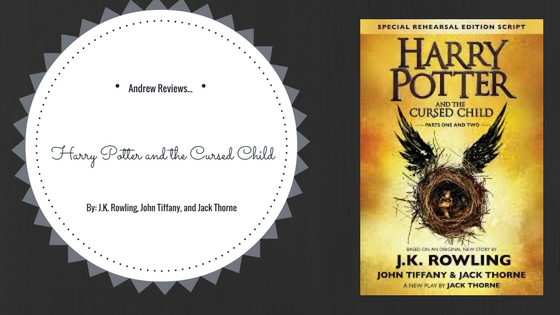 I’d been a big fan of Harry Potter ever since middle school, maybe even longer. Everytime I open up the pages of one of J.K. Rowling’s books, I would fall in love with the magical wizarding world she created, from the greatest shopping center ever, Diagon Alley, to the school I wish I could have gone to and was very upset to have never gotten my letter for, Hogwarts. And I know I’m not the only one who feels this way. Over the past 19 years, dozens of people have to been introduced to Harry Potter, whether it was by books or by the movies. And when we found out that J.K. Rowling wrote a new part of the series, Harry Potter and the Cursed Child, we were all very excited. I for one got it for my seventeenth birthday and had already read it within three days.

It wasn’t as great as I’d hope it would be.

Don’t get me wrong; I didn’t hate it or anything. It was still an enjoyable experience and for the most part, I did like it. Not love it, but it was okay. For one thing, it was the way it was written. For those of you who don’t know, Cursed Child is a theatrical play, and it was the script that came out as the published work piece. And while I could understand the basic premise of the story, it was difficult to picture it. One of the best parts about reading is using the author’s words and imagery to create an image in your mind, making reading a novel seem like watching a movie in your head. But if all I can see are what the characters are saying, along with some simple notes of what is happening to the stage and what the characters are doing, then my mind can’t create the picture.

Here’s the simple story: Nineteen years after the defeat of You-Know-Who, Harry and his friends are at the Hogwarts Express, and his son, Albus is worried about getting into Slytherin. After Harry comforts him that being in Slytherin is good and that if he really wanted to, he could choose Gryffindor, Albus gets put into Slytherin. And from there, a lot of stuff happens. There’s a myth that Voldemort had a son before he died, and that son, or “Cursed Child” (See what I did there) will bring him back from the dead and together they’ll take over the world. On top of that, Amos Diggory is still mad at Harry for the events that occurred at the end of Goblet of Fire, and Albus, along with his new friend Scorpius, who is Malfoy’s son and everyone believes is the Cursed Child, go on an adventure with Cedric Diggory’s cousin, Delphi, to find a time turner and stop Cedric’s death. And from there, a lot of other stuff happens, like at one point Albus is erased from existence because of a creative yet kind of dumb reason. I would explain, but it would probably get confusing. Also, what up with the trolley lady at Hogwarts express?

Here are the good things: The story, I found, was good. The new characters are interesting, seeing the old ones from the original series brings back nostalgia, and it’s nice seeing what would have happened if You-Know-Who won and Harry lost.

Here is what I didn’t really like: While I enjoyed the story, there are some small things that I felt were odd. The main one? Time turners. Out of all the possibilities Rowling could have done for a Harry Potter sequel, and she chooses to bring back Time Turners? In The Order of the Phoenix,  she made the Time Turners destroyed to avoid any future problems with the time traveling machine, like “Why didn’t Harry just go back and kill You-Know-Who when he was a child?” or something along those lines. So why would she decide to make them a big factor of the story? Also, I never understood the meaning of the title. Why is it called The Cursed Child? I know I said earlier about the Voldemort and his kid, but they never actually said the words “cursed child”. Maybe it’s one of those things open to interpretation. Maybe the cursed child is Harry for being cursed by Voldemort when he was younger? Who knows.

But for me, the main problem isn’t even what’s inside the book; it’s how they marketed it. The Cursed Child is known for being the eighth story, but it doesn’t feel like it belongs with the other seven books. It just seems like there’s the seven books, then the sequel. It’s kind of like Star Wars. Before The Force Awakens, there were two different parts to it: The Original Trilogy, and the Prequel Trilogy. It’s never just the Star Wars series in general.

So, after hearing what I had to say, should you read Harry Potter and the Cursed Child? If your a Harry Potter fan, then definitely; you might have already read by now. If you aren’t familiar with Harry Potter very well, then maybe it would be best if you skipped this one out. Not knowing everything about the series and then reading this would probably confuse you a lot.

Those are my thoughts on Harry Potter and the Cursed Child. If there is a book you want me to read and review (Can’t make any promises!), then comment below. Also comment below if your excited for Fantastic Beasts and Where to Find Them!