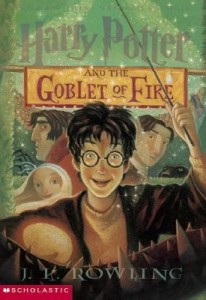 Harry Potter and the Goblet of Fire by J.K. Rowling with illustrations by Mary GrandPré

The Triwizard Tournament is here! 3 people above the age of 17, from 3 wizarding schools that are Dumstrang, Hogwarts, and Beauxbatons will compete in 3 tournaments and the winner will get 1,000 galleons(1,00 gold coins)! But when they chose the competitors names Harry got chosen and he is only 14! Now Harry is battling dragons, merman, and unusual fire-breathing creatures. But something is wrong in the world, people are dissapering and at Hogwarts Harry’s scar is starting to hurt during class and it only hurts when Voldemort is near him. Could Voldemort really be near Hogwarts or is Harry just dreaming?

My favorite part was when Harry was in the water trying to get past the merman. When harry got Ron he also got Flo’s sister because Flo couldn’t make it. I liked this part because it was adventurous and Harry did a very brave and kind thing.

This book’s genre is fantasy. This book’s story line is action oriented. This book left me feeling surprised. On a scale of 1-5, I give this book a 5!

This review was written and submitted by 4th grader Naimisha.