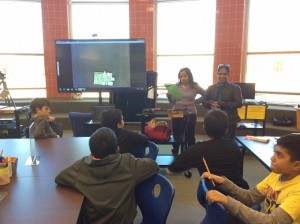 The first official meeting of the Raspberry Pi Club took place on January 8th! It was super exciting to see all of our new members! Since I had no idea what to do with our Raspberry Pi, I was thrilled to have 3 of our participants parents there. One of the parents had used a Raspberry Pi before, and the other 2 parents knew a lot about computers in general, so that was super helpful.

As we worked to plug all the parts into the Raspberry Pi to get it started, we talked to the students in the club about the difference between CLI and GUI interfaces. We also talked about operating systems and what they do. We had the kids help us name some operating systems they knew of and discussed the distinctions between operating system and brand names of computers.

We were ultimately successful in getting the Raspberry Pi hooked up to the TV, the mouse, and the keyboard. We also decided to go ahead and install the GUI interface to work with on the Raspberry Pi. In our next meetings, we will be going to the computer lab and working with http://code.org/ and http://scratch.mit.edu/to learn some basics about coding.

I am really looking forward to seeing what this club creates!