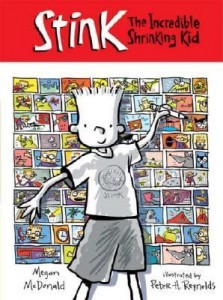 Stink: The Incredible Shrinking Kid  by Megan McDonald and illustrated by Peter H. Reynolds is a great “Guy Grab” book by the same author of the Judy Moody series. The Stink books are a series, and have the same humor and quirky feel as the the sister Judy Moody series.

In this series, Stink is Judy Moody’s younger brother. I liked this one the best because I have often felt as if I was shrinking instead of growing, which is the central problem Stink is dealing with.

He also gets to bring home the class science experiment, a real live newt (look that one up!), but things go terribly wrong when Judy and Stink try to clean the tank where the newt lives!

Ultimately though, this is a really fun book that boys and girls can enjoy, but I really think that the boys will appreciate this one more ;-)!